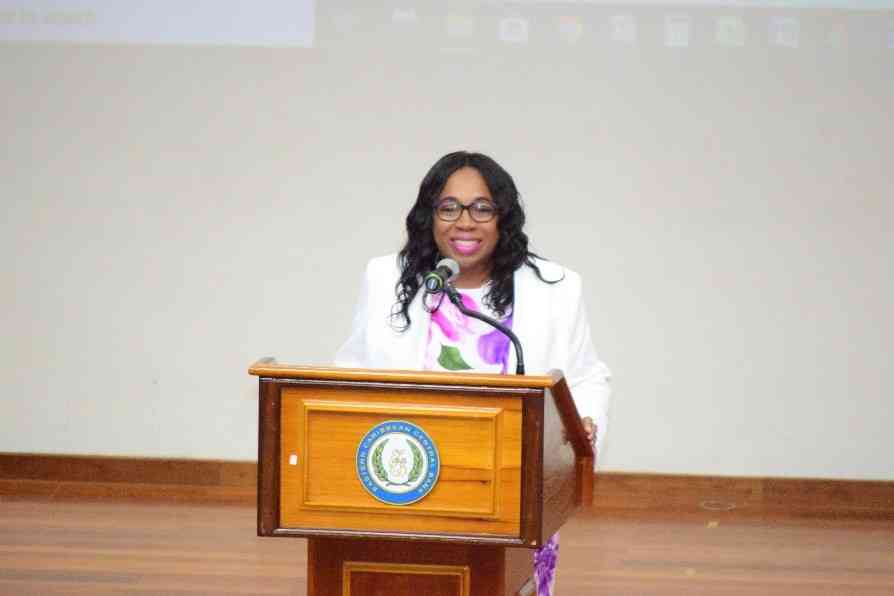 International Women’s Day (IWD), celebrated annually on March 8th, has been observed since the early 1900’s and is a day focused on celebrating the social, economic, cultural and political achievements of women worldwide.

This year’s theme was “I Am Generation Equality: Realizing Women’s Rights” and in commemoration of this day, the Department of Gender Affairs hosted their International Women’s Day Awards Ceremony on March 6th, 2020 at the Sir Cecil Jacobs Auditorium at the Eastern Caribbean Central Bank. This event was aimed at acknowledging and celebrating the contributions of women in our society to the growth and prosperity of our Federation.

President of the Clarence Fitzroy Bryant College (CFBC), Dr. Jacqueline Austin, was invited to give the keynote address. In keeping with the theme of IWD2020, Dr. Austin’s speech was focused on gender equality. As she addressed the awardees and the attentive audience, highlighting the importance of men and women working collaboratively, she also reiterated the growing need to dismantle gender stereotypes many of which in the Caribbean context, have their roots in slavery. Slavery has set a precedence for gender relations but despite the challenges, we have witnessed the advancement of Caribbean women who are committed to “breaking the glass ceiling”. However, the most inspiring piece of Dr. Austin’s speech was her spotlight on how Malala Yousafzai, a Pakistani young woman, became an advocate for the education of girls.

As a young girl, Malala Yousafzai bravely defied the Taliban in Pakistan, demanding that girls be allowed to receive an education. This strong stance led to the Taliban issuing a death threat against her. In 2012, on her way home on the school bus, she was shot in the head by a Taliban gunman but survived the attempted assassination. After overcoming all odds, in 2013, she gave a speech to the United Nations and published her first book, ‘I Am Malala’. She became the youngest person to ever receive the Nobel Peace Prize. Despite, the dangers she faced, Malala has continued to speak out on the importance of education.

Dr. Austin’s highlight of this ‘shero’ was timely as we often take for granted the privileges we are afforded, such as education. On March 8th, Ms. Karissa St. Juste was awarded at the Ross University School of Veterinary Medicine (RUSVM) IWD Awards Reception for her contributions to the CFBC